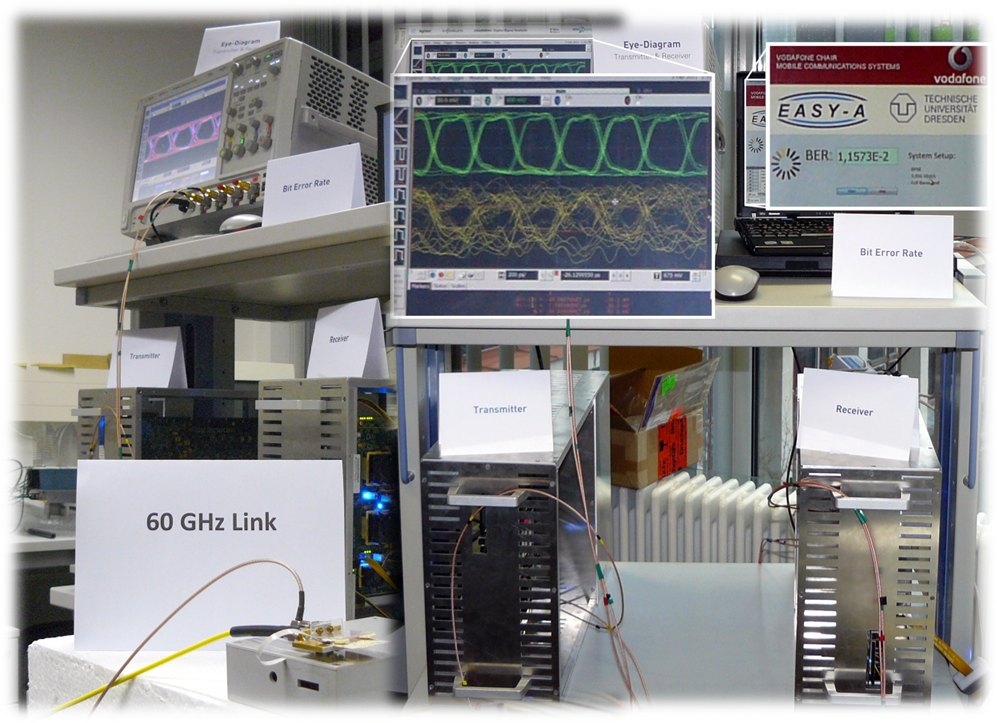 The 60GHz frequency band provides up to 9GHz of unlicensed bandwidth and is well-suited for wireless short-range interfaces that require data rates of several Gbit/s. One example is a fast wireless data link between two mobile devices such as a digital camera and a laptop PC. For these kinds of applications, the wireless channel is typically a line-of-sight channel. This allows to use a simplified transmission scheme, e.g., without channel equalization, to maximize the achievable data rate while keeping the hardware-effort at a minimum.
The presented demonstrator shows the feasibility of such a system design. It realizes an error-free real-time transmission of long data packets at 60GHz with a data rate of multiple Gbit/s. It consists of a transmitter and a receiver, each of which comprises a hybrid 60GHz frontend with highly directional antennas and a digital baseband processor that is implemented on an FPGA platform. The simplified system concept builds on 1-bit data converters at the transmitter and receiver, thus enabling a low-power, low-complexity IC solution in future.
The system design is scalable and not limited to the 60GHz frequency band. At higher carrier frequencies, e.g., at 100GHz to 200GHz, larger bandwidth can be used to achieve data rates on the order of hundreds of Gbit/s, using the same system concept. This is in the focus of current applications like wireless board-to-board links in computer racks.